Recently, I went to the studio of Stephen Temkin, the creator of Leon Drexler Handcrafted Fedoras in Toronto and it’s always grand to meet a fellow person who is interested in getting all the smallest of details right. From the hue of that dark blue-green grosgrain ribbon from a factory that no longer exists, to the silk filament thread that is meticulously used to invisibly stitch the binding on the edge, to the silk lining that is sourced from Italy (because it’s better), to the durable beaver felt pounced to that perfect finish, his hats are the perfection of luxury and quality that you’d see from the best bespoke hatters in the 1930s. 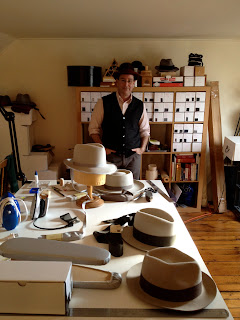 Stephen Temkin in his studio 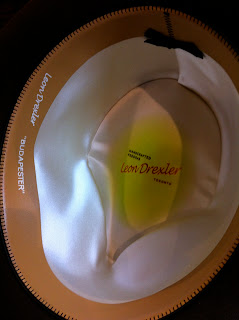 Italian silk liner and sheepskin leather sweatband
There are not many custom hatters left in the world. Of the ones who are still around, there are plenty who can slap together a hat for you with ease, but when it comes to what Stephen is doing in his studio, there is no sense of ease here; he's a craftsman in the old world sense, possessing an eye for detail, a passion for quality materials, and the respect and knowledge of those materials to know how to make some of the best hats on the market today.
Prices range from $425 to $525 depending on the style and your requirements.
Leon Drexler  Website

There are times I feel full of romance and there are times that I don’t. I’ve gone through a few things in my life, I’ve had lots of money and I’ve had little. I’ve struggled like a peasant and been treated like a king, yet overall, I’m probably spoiled by what I’ve seen and done. I’m in Toronto at the moment building a company out of styles I once thought totally out of the consciousness of the mainstream; styles that appear to be all the mainstream really wants within the last few years yet I see it through my myopic eyes. They want it, but also to my eye, they only want it in a corrupt way. I’m not the rudder of fashion… I can only love my style and know what I love within that paradigm. A paradigm that gives me the emotional reaction I want to feel. I could easily walk out the door everyday wearing a pair of shorts with a top hat or a monocle with a pair of striped pants, but I’d only truly be an eccentric at that point and I don’t have the money or the inclination to deal with the comments, I get enough as it is.
Anywho, just some floating thoughts for this periodical blog… The Powell Fedora is available and it’s sales are growing. Two new headwear styles will be out next month, one of them for the ladies. My style stays as true to my ideal of romance, and something truly from the heart, as all the other goods I will produce as the years go by. There are a couple great designers out there that give their twist to glamour and quality. Matt Deckard Apparel is one you should put in those ranks but without a twist.
Being in Toronto I thought I’d show a few pics of my latest goings on.
Vintage1940s merino wool and cashmere navy blue overcoat.
Oliver Peoples O'Malley sunglasses in AMT with mint green lenses
Matt Deckard Apparel Arctic Blue stripe spearpoint collar shirt.
Ralph Lauren Fair Isle sweater vest
Vintage burgundy necktie with red stripes (You can never beat the length and shape of 30s ties)
Allen Edmonds Shell Cordovan special order wingtips
Ralph Lauren burgundy argyle socks, wool blend
Deckard Headwear Powell Fedora in Tusk (You can never beat a Deckard Headwear hat)
Matt Deckard Apparel Laureate tweed suit 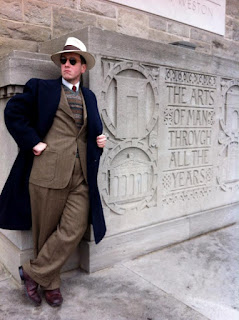 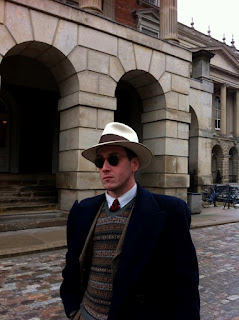 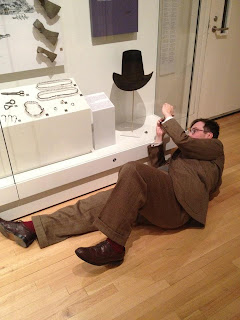 Putting it all together

Matching patterns: It's not something that comes over night, it's something that comes over night after night of mistake after mistake, until you just start realizing you look terrible and have to head back to the mirror until it's just right. So, here is a short and hopefully useful guide to mixing patterns and a few points on odd jackets and trousers. The rules are not set in stone; yet, harmony is often better achieved when you lean towards them.

It's very easy to pop on that solid tie and solid shirt and solid suit... I know the President does it every day, but you aren't that guy shackled to a desk and followed to the bathroom by two men in sunglasses, so you can dress a little more boldly like they did when Fred Astaire and James Stewart were gracing the big screen. 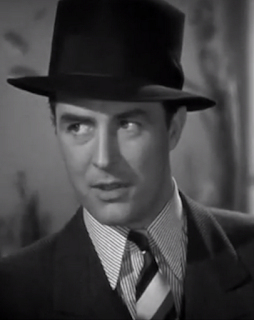 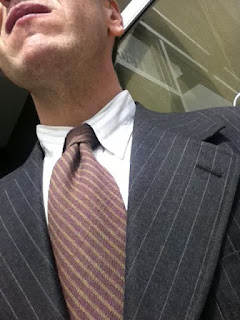 It's not always advisable to mix three stripe patterns, unless you have one that is subtle and very much part of the background (the shirt) and two that are bolder. The two remaining stripe patterns must be of different scales or the look will be very distracting.
When putting different patterns together, ensure the patterns are of similar scale.
Big stripes - big dots
Small plaid - small stripes
Big paisley - big stripes (or wide enough to balance with the paisley) 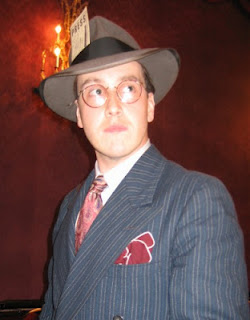 The scale of the pattern on the tie is in scale with the double stripe pattern on the jacket. Different patterns, same scale (I was on assignment that day, hence the press pass). 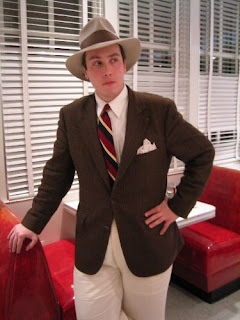 The broad stripes of the tie match the scale of the plaid on the jacket in the above outfit. Ideally, I'd have paired cream flannel trousers with the heavier jacket, but I thought the linens worked fine for this warmer day in L.A.  The white cotton hanky shows I'm ready for anything. 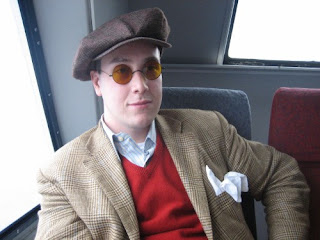 In this case, the little stripes in the shirt flow with the small lines in the broad plaid.
I like how focus goes to the bolder pattern on the jacket.

Outside of pattern matching, here are a few things you should keep in mind when putting it all together. 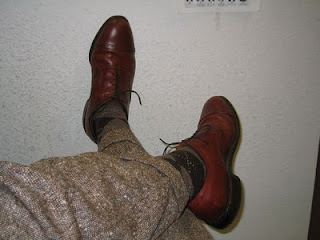 Socks don't need to match your pants. If you want to make a statement and wear something flashy that's fine; however, if you don't want your socks to own your outfit, your socks should echo the color of your pants. Don't wear black sock or white socks unless you are wearing black pants or white pants.
I have seen on several occasions where men have attempted to pair a solid color sport coat with a pair of trousers that is near to the color of the jacket, in effect, trying to create a pseudo suit... DON'T DO THAT. A suit is always a matching material jacket, vest, and trousers, and you can leave the vest behind at times. When you wear a solid sport coat, always wear trousers that are complementary to the jacket's color, far enough away from the jacket's color so as to not be confused with being a suit. 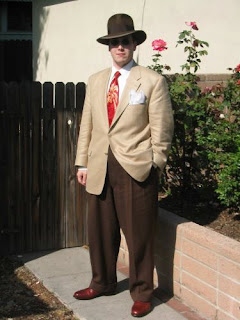 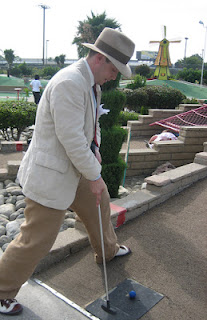 Light brown sport coat with dark brown trousers (ignore the ankle skin, it was a bad sock day for me).
Follow these basic rules and over time you won't end up blinding your friends with pattern confusion when you run out of clean white shirts and are forced to pair that windowpane with those polka dots.

We'll discuss colors and hues at greater length in a later post... they are much more important to get right yet much more confusing to explain. Until then, a brief teaser. 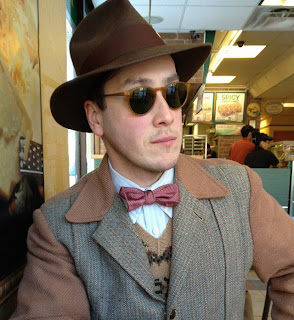 A classic Hollywood jacket paired with a subtle arctic blue striped shirt, fine striped silver and red bow tie, the color not too red as to steal the show, and a Fair Isle sweater with a pattern bold enough to take the attention but coordinating in color enough to not ruin the show.
Posted by Matt Deckard at 1:44 PM 2 comments:

Matt Deckard
Los Angles, CA, United States
I really like to travel. I had a closet full of ill fitting things so I became a menswear designer and garnered a following of clients that look for something just a bit better when it comes to fit and balance. Suits and shirts that look well made and feel like pyjamas. www.mattdeckard.com I write a menswear column in Zelda Magazine and am the longest standing moderator on the Fedora Lounge. I have written articles in Classic Style and Femme Fatales Magazines and styled shoots for Classic Style, Femme Fatales and Geek. I'd go on and on but this isn't a resume, it's little bit on me. I'll be posting local spots and happenings at times, yet mostly observations on clothing... things I couldn't find in many places and often had to learn on my own. I hope you enjoy reading these tidbits, because at times I really really enjoy writing them.